On the Eve of National Day 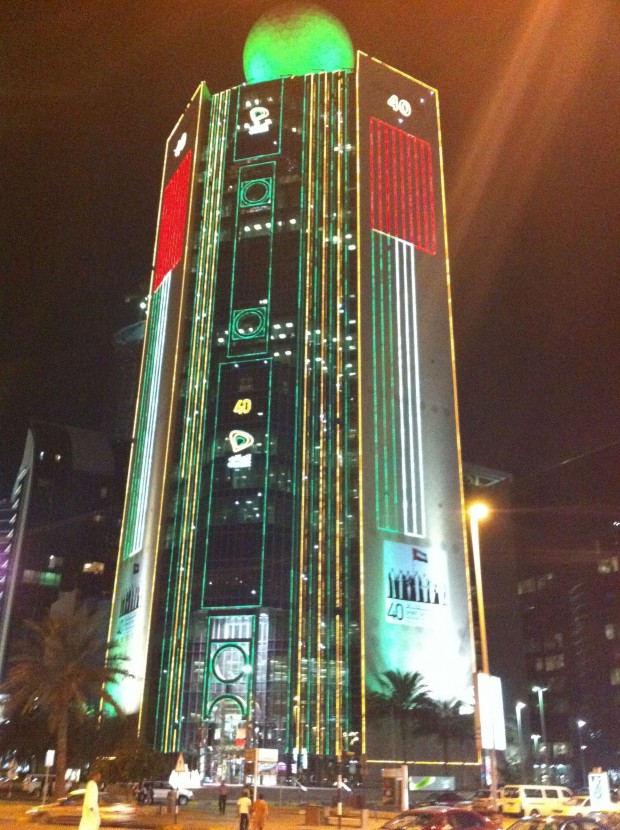 It’s exhilarating, but not a little strange, to be living in a country that’s younger than I am. I turned 50 back in October; the United Arab Emirates turn 40 tomorrow. Every December 2, the country celebrates “National Day,” which commemorates the day on which the Constitution of the UAE came into effect. Before 1971, the seven emirates — Abu Dhabi, Ajman, Dubai, Fujairah, Sharjah,  and Umm AI Quwain — together with Bahrain and  Qatar were known as the “Trucial States,” because of a truce between them and Great Britain. After Britain decided to end the treaty arrangement in 1968, a union of the states was proposed, but Bahrain and Qatar would eventually elect to become independent states. The initial constitution named Abu Dhabi the temporary capital of the UAE with its ruler — Sheikh Zayed bin Sultan al Nahyan — the country’s first president. In 1979, a permanent constitution was proposed, in which the military and judicial systems of the seven emirates would be unified. Dubai, however, balked and threatened to leave the union, relenting after mediation from Saudi Arabia and Kuwait. Plans to build a new capital midway between Abu Dhabi and Dubai were scrapped and eventually Abu Dhabi was named the permanent capital in 1994. Two years later, Dubai agreed to a permanent constitution that cemented the union of the emirates. The constitution provided for a unified military force, but allowed Dubai and Ras al Khaimah to maintain their own judicial systems.

I missed National Day last year, but arrived later in December to find the streets still lit up with celebratory decorations in the colors of the UAE flag — red, white, and green (the fourth color, black, doesn’t figure much in the illuminations except as background). Driving in from the airport and seeing all the bright decorations reminded me of New York, lit up at the time with Christmas lights.

Because 40 is a nice round number, this year’s celebration is an even bigger deal.There have been activities all week throughout the Emirates, including a military plane display yesterday in which smoke was released in the colors of the UAE flag, a splendid fireworks display tonight over the Corniche, and a massive Olympic-opening-ceremonies-style extravaganza over at the Zayed Sports City tomorrow.

It puts me in mind of New York again — in particular, the festivities on the annual Puerto Rican day with T-shirts, flags, and gaudily decorated cars. Except on a much more massive scale. The building shown above is the Etisalat Tower across the street from us, which has been sparkling each night for the past two weeks. All around town, public buildings and private houses are covered in bright lights; we’ve seen a few houses wrapped in massive UAE flags.

And the cars: everywhere you look you see cars, large and small, covered in large decals celebrating the anniversary, featuring UAE flags, hearts, the number 40, and likenesses of Sheikh Zayed and of the country’s present rulers. Here are some samples, mostly massive SUVs, but also the first Smart Car we’ve seen here: 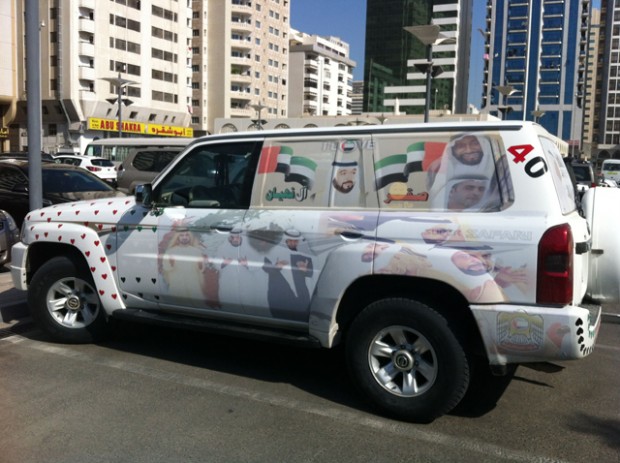 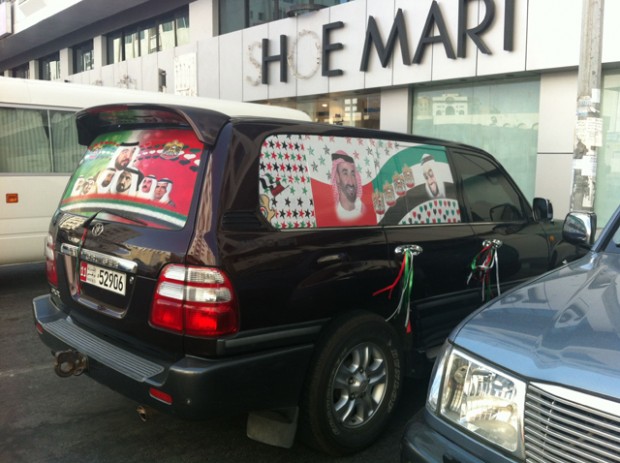 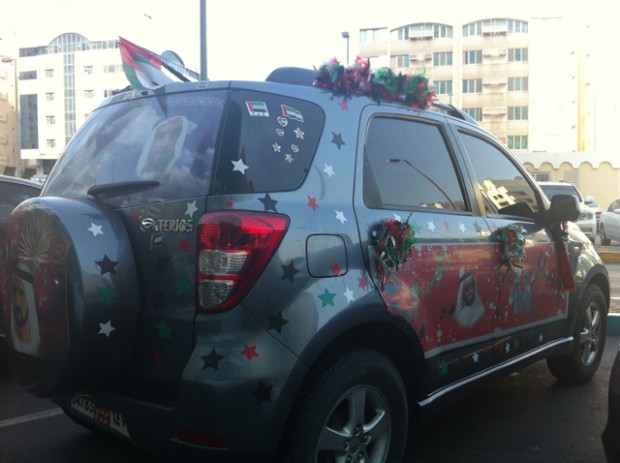 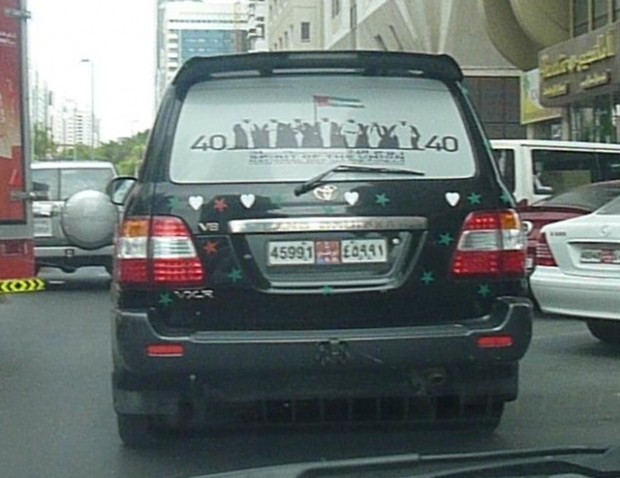 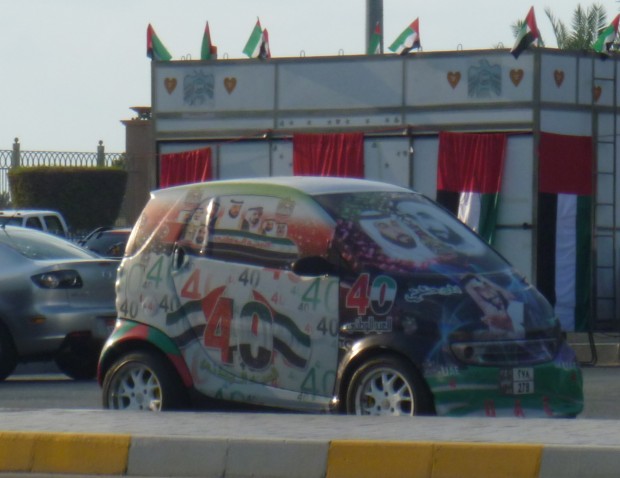 Tomorrow, there will be a parade of decorated cars over at Yas Island, with prizes to the three judged best; there will also be an unofficial parade of cars, I’m told, over at the Corniche. And, in addition to horns blaring, there will be the sounds of cars being made to backfire intentionally.

Meanwhile, we’re doing our bit and getting into the holiday spirit: 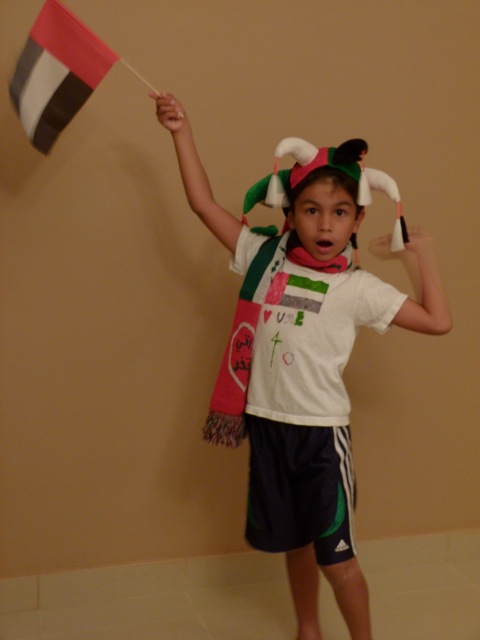