Remembering Some Girls and Marquee Moon at McNally Jackson 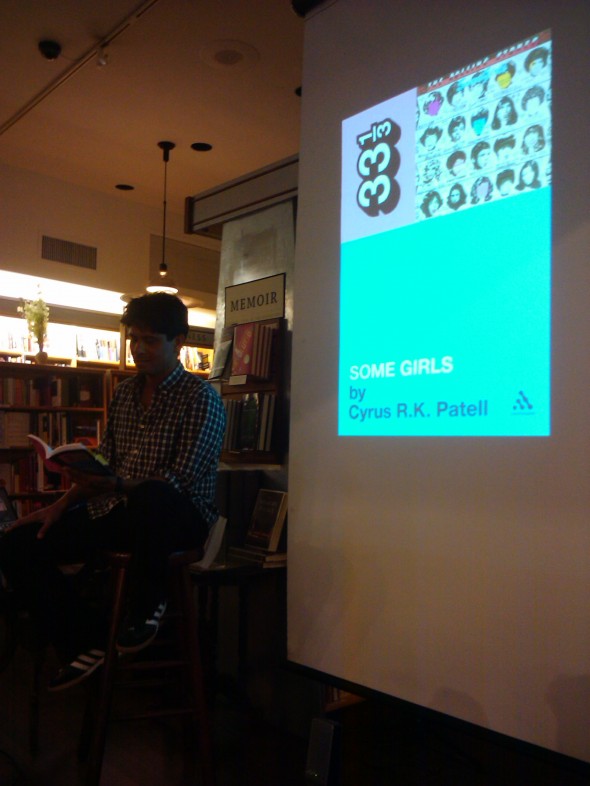 Bryan Waterman and I celebrated the release of our books for Continuum’s 33 1/3 series last night with a joint reading at the McNally Jackson Books in Nolita.

We talked about the ways in which we conceive of my book, The Rolling Stones’ Some Girls, and his, Television’s Marquee Moon, as companion pieces that paint a portrait of New York in the Seventies and its influence on both established and emergent rock bands. After describing the counterintuitive proposition that opens my book — that Some Girls is a “New York album” by a “New York band — the Stones of the late Seventies and early Eighties” — I took a closer look at the song “When the Whip Comes Down,” suggesting that it might be seen as the bastard child of “Rhinestone Cowboy” as performed by Glen Campbell and the Ramones’ “53rd and 3rd,” from their eponymous debut album.  I closed by citing Robert Christgau’s Village Voice piece “The Stones in 1978,” in which the critic praised the band’s onstage rendition of “Whip” and other songs from Some Girls at its show in Passaic, NJ, but described Television’s Bottom Line show during the same week as a glimpse into the future of rock ‘n’ roll: “Television’s syntheses promise a future the Stones can no longer imagine.”

Television customarily played a version of the Stones’ “Satisfaction” during their 1978 shows, and I played the version that can be found on the live album Blow Up as a segue to Bryan’s talk, which focused on Television’s debt to the Stones but then explored their invocation of other pop traditions that were important to the bands playing at CBGB’s. His exemplum was “Prove It.”

We’ll be doing another joint reading next Tuesday night at 7:00 p.m. at Word bookstore in Brooklyn, playing different songs as we explore connections between the two books. And we’ll be appearing at that morning on DJ Trouble’s show on WFMU. The program, “This is the Modern World with Trouble,” runs from 9:00 a.m. to noon on Tuesdays. We’ll be on  at about 10:30. Trouble did a guest playlist for us over at “Patell and Waterman’s History of New York” last week, one of a number of guest spots that Bryan has organized to celebrate the release of the books.