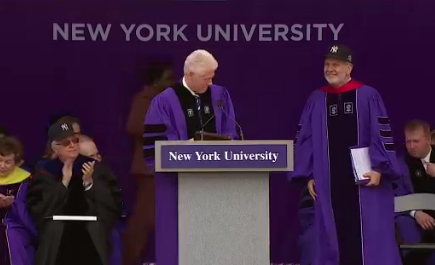 I had the honor today of being a member of the platform party at NYU’s Commencement ceremony at Yankee Stadium, representing NYU Abu Dhabi in its inaugural year. I tried not to let on too much beforehand just how thrilled I was that this honor had descended on me due to the travel schedules of AD’s senior leadership.

I’ve been a pretty regular participant in NYU’s various commencement, baccalaureate, and convocation ceremonies over the years. Typically, I’m the only member of the English Department at the all-university commencement; I think I’ve only missed two of those ceremonies in my eighteen years at NYU. (I used to joke that each time I went to a ceremony brought down the price-per-wearing of the expensive doctoral robes that my parents bought me when I completed graduate school.) In my case, an appreciation of academic ritual is probably a legacy from my alma mater: Harvard does academic ritual very well, and from my first year there, I was drawn to the pomp and circumstance of the commencement ceremonies (which I managed to attend even as an underclassman because I worked for the weekly newspaper).

Commencement marks the end of our academic year, but the word means “beginning”: it marks a new beginning for those who graduate, leaving the university behind to enter into the so-called real world.

This year’s commencement was particularly memorable for me, and not just because I was on the platform or because Bill Clinton gave a wonderful address. It marks a new beginning for me and my family, as we leave NYU New York behind for NYU Abu Dhabi, where we will spend the next academic year.

John Sexton likes to describe occasions such as today’s commencement as “sacramental.” In his brief address this morning, Sexton said, “Every graduation is a sacrament. We engage in ritual, dress in special ways, having orations, in order to mark the day as special and to create everlasting memories.” Today, as the rain held off for the duration of the ceremony at Yankee Stadium, the occasion certainly felt special and, indeed, sacramental.

I’ll have more to say about today’s commencement, Bill Clinton’s speech, and other sacramental moments in the coming days. Meditating on such moments seems like a good way of starting to take stock as my family and I prepare for our new adventure.

[You can watch a video of today’s commencement ceremony here. The picture above is a still taken from the video feed.]