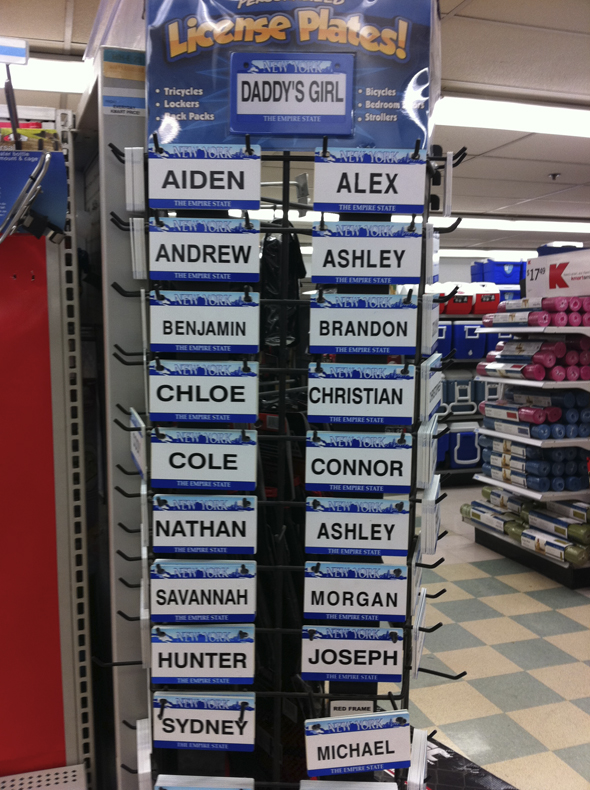 My video lecture on cosmopolitanism for the NYUAD Summer Colloquium begins with an account of my name — Cyrus Rusi Kaikhusroo Patell — and the naming of my sons, Liam and Caleb. Yesterday,when I was in K-Mart looking for bike supplies, I saw a display of license plates for childrens’ bicycles. Growing up, I used to look longingly at racks like this one, knowing that there would never be a license plate for me. So, almost reflexively, I checked: nope, no “Cyrus.” And then I checked again: no “Liam,” no “Caleb.”

Of course, the good thing about growing up with the name “Cyrus” in New York City was that I could always identify myself simply by using my first name. That’s still largely true today. It’s less true of “Liam” and “Caleb” despite the lack of recognition by the company that makes the bicycle license plates.

Taking a third look, I was surprised at some of the names that actually were there. Aiden? Cole? Savannah? Hunter? So I decided to check the “Popular Baby Names” page of the Social Security Administration’s site. Apparently, the top 10 boys’ names for 2009 were:

Pretty Biblical for the most part. “Jayden” is the one that’s not like the others. I wonder what force propelled it onto the Top Ten List. For the sake of comparison, here’s the list from the year of my birth (not telling, but you can find it elsewhere on the web):

And in the year of my birth:

In high school and college, I had serious relationships with a “Cynthia” and a “Susan,” and I’m now married to a “Deborah.” My wife’s name, however, had slipped to No. 12 by the year of her birth.

I look forward to buying Liam and Caleb license plates for their bicycles in the future. I wonder how old they’ll be.