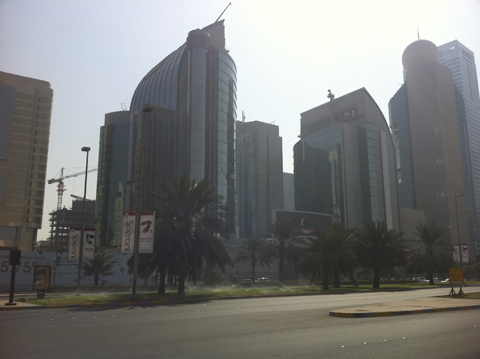 The past two days have been full of meetings, both formal and informal, about policies and practices that are in place or planned here at NYU Abu Dhabi. At the first-ever meeting of the NYUAD Arts & Humanities Faculty on Tuesday, which brought together members of the standing faculty and affiliates from New York, we had a full turnout, missing only a couple of faculty members who have not yet arrived in Abu Dhabi. Looking around at the twenty-three colleagues who had convened to talk about our plans for the semester, I felt a palpable sense of excitement at the potential just waiting to be realized.

It’s been particularly exciting to have the opportunity to start conversations about the curriculum. We who were on the coordinating groups that helped to build the current NYUAD curriculum have always imagined that we were handing off a template that enshrined some principles about making connections among disciplines and forging links between theory and practice. We hoped that the curriculum would evolve once the NYUAD faculty convened and began to implement it. That process of evolution has already begun, and I’m looking forward to working with the faculty this fall to think in both practical and theoretical terms about the curriculum we have — and that we’d like to have. I suspect that we will be able to the kind of discussions about pedagogy that we have all too rarely back in New York, and my hope is that the process of curricular innovation that began in New York some two years ago will continue and accelerate here in Abu Dhabi.

Meanwhile, we recognize the importance of making sure that life outside the classroom is rich and fulfilling for NYUAD students, and I’m hoping that we can apply some of the principles that animate the Faculty Fellows program at NYUNY: thinking of the residence hall and indeed the city around us as learning spaces. Yesterday, we started the process of putting together two extracurricular activities that can serve as extensions of classroom learning into the world beyond: a debate / model UN society and an arts & humanities journal.

In both cases, we’re going to encourage the students who participate to rethink the very enterprises that they’ve joined, asking what kind of debate society and what kind of journal should we have here and now — in Abu Dhabi and in the twenty-first century. What constitutes a cutting-edge approach to a debate society and to a publication? We’ll encourage the students to think of these as collaborative enterprises, in which they will collaborate with other members of the community — including faculty and staff — across disciplines. I’m pleased to say that my colleague Paulo Horta will be advising the debate society and that my colleague Sheetal Majithia will be advising the publication, which will likely be oriented around a website, but will also likely have some kind of finished product that is periodically produced — perhaps on a DVD or flash drive or in the form of an app for mobile devices and electronic readers.

It’ll be fun to watch these concepts evolve as the students get hold of them and apply their creativity. In both cases, I hope we’ll be able to look at what we’ve managed to produce and think, “Cool!”

[Photo: Al Maktoum Street at the corner of Al Nasr, facing the Marks and Spencer]