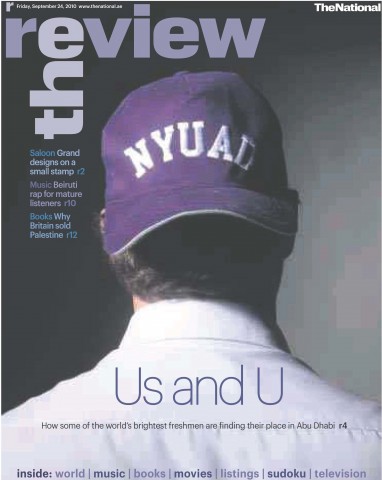 Here’s how the opening Iftar dinner was described in the cover article of The Review, the Abu Dhabi National‘s Friday magazine:

Besides, if the students seemed slightly starry-eyed during the introductory portion of that Iftar welcome banquet, they got the chance to demonstrate their analytical grit later in the evening. Before their arrival they were asked to read Kwame Anthony Appiah’s Cosmopolitanism: Ethics in a World of Strangers, an essay on the complexities of life between cultures. The book recommends a conversational attitude of openness to persuasion, a recognition of one’s own fallibility, and a willingness to keep improving one’s ideas about the world. This all makes sense as a regulatory ideal for a university which takes students from all over the globe and asks them to live together in a single building. It’s perhaps more surprising that practically tile first thing NYU Abu Dhabi should have done with its new arrivals was ask them to take that ideal to pieces. Yet as the dinner wore on and jetlag took its toll, Cyrus Patel [sic], a star literature professor from NYU New York, did just that, gliding between the tables armed with microphone and steely, talk-show affability.

“Call me Cyrus,” he insisted, before explaining that he would forego the advertised question-and-answer session in favour of an open discussion. A few hands shot up. One student suggested that cosmopolitanism was just American liberalism by another name. “I would like just to comment on the concept of truth,” another began ominously. Someone embarked on a learned but tangential piece of Quranic interpretation. Amid the wreckage of their meals , the students’ earlier keenness seemed dulled. Some rested their heads on the backs of their chairs. One diverted himself by throwing food and catching  it in his mouth. A girl at my table had just travelled from Oklahoma, a journey of 25 hours. How, an excitable young  man demanded, could cosmopolitanism be an adequate response when confronted with people who don’t want to talk, who don’t want to change their minds, who refuse to compromise? Wasn’t force ever justified? “That is a problem we are not going to solve tonight,” said call-me-Cyrus smoothly. The session was over.

Several of my NYUAD colleagues commented on the appropriately Melvillean nickname conferred on me by the author of the piece, Ed Lake, who is deputy editor of The Review. (And I’m only slightly bitter about the misspelling of my surname.)

The article as a whole is pleasingly quirky: Lake has a nose for the odd little incident that can give life to a feature piece, and he manages to capture the slightly giddy flavor of those first few days. [Click here to read the entire article.]

I wonder if the members of that budding a capella group, which Lake mentions in the final paragraph of the article, know that the opening number of the new season of Glee was “Empire State of Mind”?