Thar She Blows: BP and the Ahab Parallax

The lead article in today’s “Week in Review” section of the New York Times is called “The Ahab Parallax,” and it begins this way: 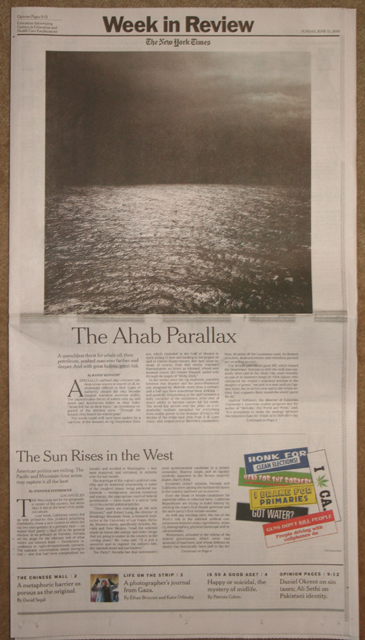 A specially outfitted ship ventures into deep ocean waters in search of oil, increasingly difficult to find. Lines of authority aboard the ship become tangled. Ambition outstrips ability. The unpredictable forces of nature rear up, and death and destruction follow in their wake. “Some fell flat on their faces,” an eyewitness reported of the stricken crew. “Through the breach, they heard the waters pour.”

The words could well have been spoken by a survivor of the doomed oil rig Deepwater Horizon, which exploded in the Gulf of Mexico in April, killing 11 men and leading to the largest oil spill in United States history. But they come instead, of course, from that wordy, wayward Manhattanite we know as Ishmael, whose own doomed vessel, the whaler Pequod, sailed only through the pages of “Moby-Dick.”

The author of the piece, Randy Kennedy, goes on to note the “parallels between that disaster and the proto-Modernist one imagined by Melville.”  Kennedy argues that “in the same way whalers had to sail farther and farther for their prey, oil companies are drilling deeper and deeper to tap the gulf’s oil, to levels made possible only by the most advanced technology, operating near its limits.”

Ric Burns ‘s documentary Into the Deep: America, Whaling & the World, recently broadcast as part of the PBS series American Experience, does a marvelous job of depicting that imperative “to sail farther and farther” into the deep, and the film is a cautionary tale about what happens to an industry that depends on the exploitation of a finite resource.

I’m putting Kennedy’s article not into the deep, but into the file for the book project that I’m calling “Why Moby-Dick Matters,” currently on the back burner — or perhaps, in the rear try pot.