I know that the summer solstice — the official beginning of summer — is still 20 days away, but as far as I’m concerned, summer began today: not because it’s June 1, but because it’s the first Tuesday after Memorial Day. It’s time to pull out the linen clothing and to start thinking in earnest about the summer’s projects. 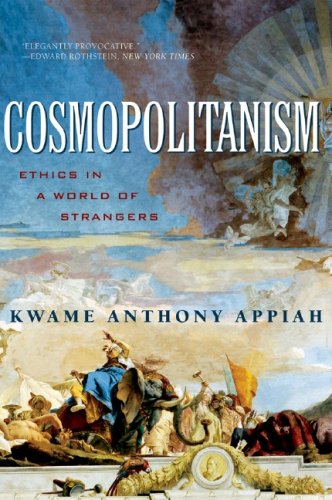 One project about which I’m very excited is NYU Abu Dhabi‘s summer colloquium, “Cosmopolitan Ideas for Global Citizens.” Our incoming first-year students have all received Kwame Anthony Appiah’s Cosmopolitanism: Ethics in a World of Strangers and have been invited to read it by June 21. The colloquium is purely voluntary. According to the syllabus, it’s designed “to delight your mind, connect you with your classmates, and help you see the world through new lenses.”

One of the goals of the colloquium is to get the students to begin thinking critically about a term that’s often applied both to New York and to Abu Dhabi — and to NYU Abu Dhabi: cosmopolitan. According to the syllabus:

As a student attending NYU Abu Dhabi, you have been described as cosmopolitan. But what does it mean to be a cosmopolitan in an international context? Often the term is associated with the sophisticated urban elite; however, the root of the word, “cosmos,” refers to the universe. A cosmopolitan is therefore a citizen of the world, with no national or political home. But how can one become a citizen of the world? Is it even desirable to do so? After all, few people want to divorce themselves wholly from a cultural community in order to join a global society. While human beings may share some beliefs, desires, and values, we rarely agree wholeheartedly on our interpretations of those beliefs, desires, and values, which are often rooted in experiences grouped by geographic place. The summer colloquium offers an opportunity to discuss the advantages and limitations, in short the paradox, of being a cosmopolitan.

The students who participate have also been asked to take a picture of something in their local communities that “captures something about its meaning or essence.” The photographs will be shared among the students online. Between June 21 and July 2, they will participate in small chat groups to raise questions about the book and the ideas it promotes (and critiques). Shortly thereafter, my NYUAD philosophy colleague Matthew Silverstein will begin convening larger online chat groups that will help the students settle on a set of key questions that will then be forwarded to me in the second week of July. Over the next couple of weeks I will put together a lecture based on these questions that will then be filmed and made available online in early August. We will likely follow up the lecture with some online discussion here at patell.org and perhaps elsewhere. We will definitely hold a live session to continue the conversation in Abu Dhabi during the orientation week in September.

To prime my conceptual pump, I’m inviting anyone out there who has read or is reading Appiah’s Cosmopolitanism to leave a comment or a question about the text here. (Profundity is not required.)