Hamartia at the World Cup 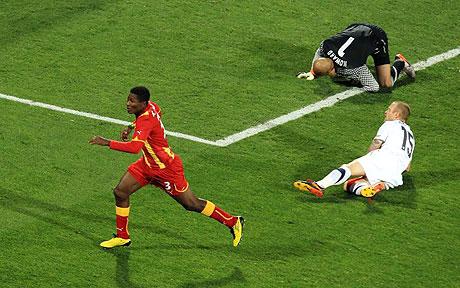 For the second World Cup in a row, Ghana eliminates the USA 2-1. At least this time there was nothing to dispute about Ghana’s second goal.

Hamartia is one of the most famous concepts from Aristotle’s Poetics, and it’s translated as “the tragic flaw” that both accounts for a hero’s greatness and also brings about his downfall. But some scholars suggest that it simply means “error,” a mistake that the hero makes from which he cannot recover.

The USA displayed hamartia in both senses of the term.

Today’s errors: Bradley’s tinkering with his line-up; a giveaway near the start at midfield, with the central defense to slow to recognize the threat and goalie Tim Howard cheating toward the center and beaten on the near post; and the defense getting split and out-muscled on the winning goal.

The USA were valiant, battling until the very end. And I hope that interest in soccer that the team’s run in the competition has generated here in the US will continue and grow.

You didn’t have to consult the Delphic oracle before the Cup began to foresee that the USA would be eliminated before the end. So I transfer my allegiance now to my backup team: the Netherlands. Go Robin van Persie!