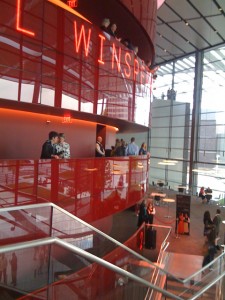 The Dallas Opera moved into its new home at the Margot and Bill Winspear Opera House last fall. The building, which is part of the AT&T Performing Arts Center, still has that new-building smell (the NYU Abu Dhabi downtown campus building has it too). It’s surrounded by lots of construction, as the Dallas Arts District takes shape around it. 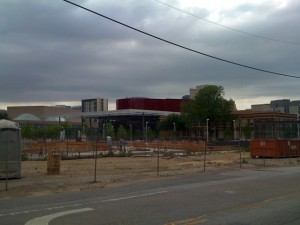 The opera house itself is a red circle in a square (though in fact it’s shaped more like a horseshoe than a circle). It has a sixty-foot glass facade, with an interior that features brushed steel, metallic grey paint, reflective curved red panels. Every portion of it seems to have been given a sponsor’s name, as you can see from this description on the Dallas Opera’s website:

A 21st century reinterpretation of the traditional opera house, the 2,200-seat Winspear Opera House’s principal performance space, the Margaret McDermott Performance Hall, is designed to be the environmentally conscious, state-of-the-art standard against which future opera houses will be measured.

The opera house’s principal entrance, known as Rosemary and Roger Enrico Family Gateway, features the Annette and Harold Simmons Signature Glass Façade that ascends to the full 60-foot height of the building, creating a seamless flow between the opera house and the surrounding park. The transparent façade provides dramatic views of McDermott Performance Hall, which will be clad in vibrant red glass panels, in addition to the Grand Lobby, the staircase and the Mary Anne and Richard Cree Box Circle and Grand Tier levels. From within the Winspear Opera House, the Simmons Glass Façade will provide a sweeping view of downtown Dallas and portions of Uptown. 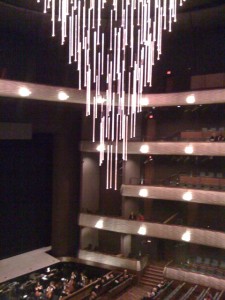 One of the ways in which the hall is a “reinterpretation of the traditional opera house” is in it use of the chandelier. When you walk in, the auditorium is dominated by a chandelier that is made of illuminated rods hanging down from the ceiling. In an homage to the Metropolitan Opera’s rising chandeliers, this chandelier also rises: each rod is fully retracted into the ceiling, leaving a starfield pattern on the ceiling — which then  twinkles as the house lights go down completely.

I liked the acoustics from where I was sitting in the dress circle, and the hall seemed quite cozy compared to the Met. My one complaint: I don’t think I’ve ever sat in a more aggressively air-conditioned venue.