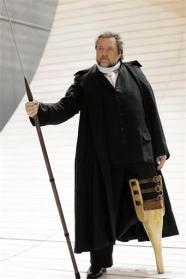 It was definitely worth the trip. The world premiere of Jake Heggie‘s Moby-Dick last night at the Dallas Opera was a stunning operatic experience that I will always remember.

Moments after the chandelier at the Winspear Opera House has retracted into the ceiling to produce the illusion of a starry night, the orchestra begins the opera’s overture. Picking up the starlight motif, projections on the scrim create the illusion of traveling through space, but also suggest navigating by the stars, as lines join the points of light together to suggest constellations. These lines suddenly become dense, rotating and mutating to depict a whaleship at sea. The scrim rises, the projection zooms in to suggest rigging, and there we are among the sleeping sailors below decks on the Pequod. The projections, by Elaine McCarthy, combine brilliantly with Robert Brill‘s striking set design throughout the opera.

Out comes the tattooed harpooner Queequeg (bass-baritone Jonathan Lemalu), who begins to pray, much to the disgruntlement of a green sailor known only as “Greenhorn” (tenor Stephen Costello), who turns out to be the man who will become “Ishmael.” There is an ominous banging of wood against wood, suggesting Ahab’s pacing the deck of the Pequod.

The set design is  marvelous, as the bleached wood of the stage curves backward and up to become a rear wall with three sets of handholds. Through the use of projections, this rear wall is used to suggest, at different times, the aft portions of the ship, the side of the ship, and the three whaleboats that are used when Ahab finally allows the crew to lower and hunt. After the hunt, about three-quarters of the way through the first act, the center of the wall opens up to reveal the tryworks, above which a portion of the whale’s carcass is hanging.

Heggie and his librettist Gene Scheer have done a superb job of streamlining the novel’s plot while remaining true to Melville’s story and central thematic interests. The opera focuses on the characters of Ahab (tenor Ben Heppner), Starbuck (baritone Morgan Smith), Greenhorn, Queequeg, and Pip (soprano Talise Trevigne), with Ahab and Starbuck, and Greenhorn and Queequeg, emerging as paired characters, much as they do in the novel. The parallel between Ahab and Starbuck — each of whom has a wife and a young son back on Nantucket — is emphasized more in the opera, and Ahab interacts with Greenhorn in a way that Melville never dramatizes in the novel. The character of Pip is also made more central. His near-drowning is dramatized in a mesmerizing coup de theatre in which he is suspended in the air while blue projections on the scrim behind suggest the vastness of the ocean. Two episodes are compressed so that Pip’s rescue is effected by Queequeg during a rescue mission manned also by Starbuck and Greenhorn. Later it is an injured Pip’s blood that Ahab uses to temper his harpoon and baptize it “in nomine diaboli.”

One casualty of the stripping down of the narrative is Fedallah, and with him the Zoroastrian motif that has been the subject of much of my recent thinking about the novel. I didn’t mind, however, because the effect of his excision is the intensification of the relationship between Ahab and Starbuck: with no Fedallah present, Ahab has only Starbuck to serve as confidante and foil. Within the context of the opera, it works brilliantly.

The opera is structured around scenes of conversation and public ritual: Ishmael’s meeting with Queequeg at the Spouter Inn is transferred to the opening scene below decks, and it is followed almost immediately by a dramatization of the rituals of nailing the doubloon to the mast and the crew’s oath to seek Ahab’s vengeance on Moby Dick. Some of my favorite scenes from the novel become the scenes that structure the opera: in addition to “The Quarter-Deck,” Scheer draws powerfully on “The Try-Works,” “The Musket,” “The Candles,” and “The Symphony.” Many of my favorite lines and speeches from the novel find their way into the libretto, and Scheer’s additions blend seamlessly with Melville’s prose.

The conversation between Ahab and Starbuck (“But come closer, Starbuck; thou requirest a little lower layer …”) is extracted from the scene and made to follow the drinking of the grog, which has the effect of rendering highlighting the conversation and making it more intimate, establishing the strange bond that will link the two men. Three days into the voyage, Ahab will threaten to kill Starbuck and Starbuck will contemplate murdering his captain in a powerful aria that concludes Act 1. (The two musket scenes are moved up in the voyage so that they occur near the beginning rather than the end.) Later, in a compressed sequence in which Queequeg is helped down from a masthead after falling ill, Greenhorn requests permission to leave his watch and accompany his friend downstairs. Ahab at first refuses, but relents after each of the mates volunteers to take Greenhorn’s place. Instead, Starbuck is ordered to raise Ahab to the masthead so that the captain will be the one to see Moby Dick and win the doubloon. When Starbuck reacts with surprise, Ahab asks him, “Who else would I trust with my life?”