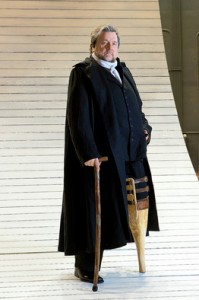 I’m feeling very twenty-first century at the moment, even though part of my mind is firmly rooted in the nineteenth. That’s because I’m typing this post on an iPad at an altitude of about 32,000 feet, connected to wi-fi on an American Airlines flight to Dallas, where I’ll be attending the world premiere of Jake Heggie‘s opera adaptation of Moby-Dick.

I just received an e-mail from my sister who writes that she recently read about the production in American Airlines’ in-flight magazine. Apparently not this month, however, because there’s no article about it in the copy of the magazine that’s in the seatback pocket in front of me.

Here it is. It was in last month’s issue. And if your interest is now piqued, you can read more about the opera at the Dallas Opera’s website.

I’m particularly excited to hear Heppner whom I’ve heard before at the Met as Tristan. At the moment, I’m listening to a collection of Heggie’s songs, entitled The Faces of Love – The Songs of Jake Heggie, which features Renee Fleming, Sylvia McNair, Jennifer Larmore, Frederica von Stade, and Carol Vaness among others. At first hearing, the songs (which are settings of poems by a variety of poets, mostly contemporary) are stylistically varied, but strike me overall as lush, lyrical, and witty. I particularly like the jazzy “Eve Song; Snake,” which imagines Eve’s response to the serpent’s proposition in the Garden of Eden and is sung by McNair.

It bodes well for tonight.