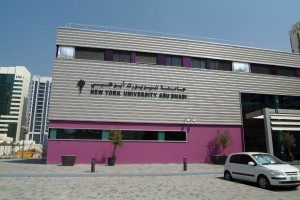 I’m pleased to announce here that I have accepted the position of Associate Dean for Humanities for NYU Abu Dhabi. An official announcement from NYUAD is forthcoming later this week. My mission is to help NYUAD Dean of Arts and Humanities Reindert Falkenburg and the newly appointed Associate Dean for the Arts, Mo Ogrodnik, ensure that the arts and humanities thrive at the new campus. I’ll be based in New York through August 2011, though I imagine I’ll be traveling to Abu Dhabi next year even more often than I have been this year. My portfolio will include playing a role in the hiring of new standing faculty in the Arts and Humanities, building bridges between departments at NYUNY and programs at NYUAD, and working to encourage the creation of collaborative teaching and research efforts between the two sites.

We’re currently engaged in curriculum planning for the coming year and in formulating the Arts and Humanities portions of the first NYUAD Course Bulletin. I’m also at work on the early stages of what I hope will be two signature initiatives within the Humanities at NYUAD. The first is research-oriented and will be a set of projects devoted to the idea of “Comparative Modernities.” The goal is to bring the perspectives created by the link between  Abu Dhabi and New York to bear on some of the research projects currently underway in the humanities at NYU. In particular, I hope to forge collaborative links to the English Department’s Re:Englightenment Project, Postcolonial Studies Project, and Project on New York Writing, as well as to the various translation studies projects underway at the Department of Comparative Literature and to the work on the production of knowledge pioneered by Mary Poovey and Troy Duster at the Institute for the History of the Production of Knowledge.

The second initiative is pedagogically oriented and centered around the idea of excellence in the use of language. It aims to bring together pedagogical enterprises that are often kept separate on college campuses: foreign language acquisition and training, expository writing, debating and public speaking, and new media.

Part of what has drawn me to the NYUAD project has been the opportunity to think outside of the disciplinary boxes into which we professional scholars often put ourselves. These initiatives will, I hope, be the start of productive conversations about the future of teaching and research in the humanities — in New York, Abu Dhabi, and beyond. Stay tuned!