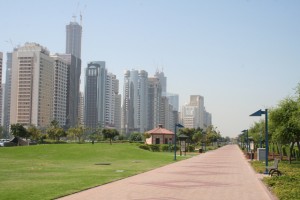 Park near the Corniche, Abu Dhabi

This morning I gave my sample class on “Cosmopolitanism Now” to a group of prospective candidates for NYU Abu Dhabi. Once again I began with the anecdote that I used to open the lecture on cosmopolitanism and multiculturalism that I gave at the NYU Abu Dhabi Institute last fall. I told the students that, as a I thought experiment, I was asking them to listen to a little bit of personal narrative as if they were “cultural critics” (whatever they thought that might mean). The narrative went something like this:

When I was growing up, strangers would ask me, “Where are you from?” and I’d say, “New York” or “the upper West Side.” They’d look vaguely disappointed and then say, “No, I meant what’s your background.” I wasn’t really being disingenuous, though I was well aware what the first question really meant. It’s just that I never particularly identified with either of my parents’ cultural traditions. My father is a Parsee, born in Karachi, when Karachi was a part of India, and my late mother was a Filipino. They had met at the International House at Columbia University, my father coming from Pakistan to study mathematical statistics, my mother from the Philippines to study literature and drama. We spoke English at home, and my parents had gradually lost their fluency in their mother tongues (Gujarati and Tagalog, respectively). What I identified with was being mixed and being able to slip from one cultural context to another. To my Parsee relatives, I looked Filipino; to my Filipino relatives, I looked “bumbai”; and to my classmates—well, on the rare occasions when someone wanted to launch a racial slur, the result was usually a lame attempt to insult me as if I were Puerto Rican.

We weren’t particularly religious at home, though we did celebrate Christmas and made it a point to attend the Christmas Eve services at Riverside Church in New York, a few blocks up the street from where we lived. My mother sometimes liked to attend Easter services there as well. It was always assumed that I would become a Zoroastrian like my father. As my mother explained it, so that I could keep my options open. I could convert to Christianity but not to Zoroastrianism later, because Zoroastrianism didn’t accept converts. But, when the time came during third grade for my navjote ceremony to be performed, we couldn’t find a priest. We kept hearing excuses along the lines of, “I would do it, but my mother-in-law is very old-fashioned.” The problem was that my mother was a Christian — oddly enough a Protestant, unlike most Filipinos, because my grandmother had converted to a Pentecostal sect before my mother’s birth.

Finally, we managed to secure the services of a priest from Mumbai who was traveling in the U.S. and spending some time in New York. Four years later, we had to go to London to have my sister’s ceremony done. It was an early lesson in the dynamics of culture, though it would take me years to recognize it.

With that bit of oral “text” on the table, I then asked the students what lessons about the dynamics of culture they thought might be gleaned from it. One student immediately began to speak about “first impressions,” and we were off to the races, thinking together about what one could and couldn’t control when one sought to make a first impression.

In the course of the discussion, the following topics came up: labeling and stereotyping; differences of race, ethnicity, class, and religion; the creation of identity in the time of Facebook; nationality and ethnicity; urban enclaves; the importance of context to thinking; the relationship between the politics of inclusion and exclusion; cultural and social insecurity as a basis for a politics of exclusion and inclusion; the interplay of sameness and difference; immigration; cultural loss; cultural contradiction.

In the concluding minutes of the class, I mapped what we’d been discussing onto recent concepts from theories of cosmopolitanism including the evolution of cosmopolitanism from an alternative to nationalism to an alternative to both universalist and multiculturalist modes of thinking; the dynamics of cultural change (what Anthony Appiah calls “cosmopolitan contamination”); the relationship between the cosmopolitan and the local, including the idea of rooted cosmopolitanism; and, above all, fallibilism and the consequent need for deep conversations in which cherished ideals are held up to scrutiny and the participants are willing to have their minds changed.

Finally, I asked the students to help me with a project for this blog. I’m hoping that, as they are thinking about the events of their whirlwind visit to Abu Dhabi, they are also thinking about an anecdote that they might have presented as an opening text for our session. Their narratives will be appearing either in the comments on this post or as guest posts on the blog in the days to come.