What Do They Have Against English Teachers? 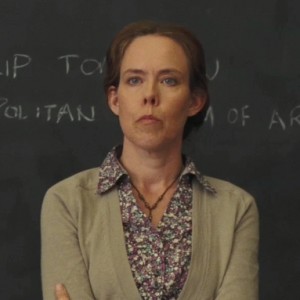 At the end of my previous post about Rick Riordan’s novel The Lightning Thief, I wrote:

I’m hoping that my students see me more as Percy’s Latin teacher, Mr. Brunner (a.k.a. Chiron, the centaur who trained Hercules) than as temporary pre-Algebra teacher, Mrs. Dodd (who turns out to be a Fury).

I finished the novel before going with my family to see the movie today. What I liked best about the novel was the wry way in which Rick Riordan inserted Greek gods, heroes, and monsters into a twenty-first century setting. Procrustes as a waterbed salesman! Charon as a record executive! The entrance to the underworld is in Los Angeles! (On that subject, see my post over at PWHNY).

The film changes a lot of things, and I don’t mind most of them. The wryness is missing, but that’s the kind of thing that a novel can convey easily and a film has to work hard to get across. This film isn’t up to that task , but that’s okay. The kids are older, but I think that’s okay too. The plot is simplified and less episodic, but that doesn’t bother me either. I’m less crazy about Poseidon’s speaking to Percy via telepathy at various points in the film. I wouldn’t have changed the identity of the ultimate villain, but I have a feeling that if there’s a sequel (and one has been announced though the sub-$40 million opening weekend may jeopardize that), that villain can be retrospectively injected into the story.

So here’s what bugs me. Why, oh why, did they have to change the Fury in the opening sequence from a pre-Algebra teacher to an English teacher? Oh sure, it makes it’s an economical way for the film to establish Percy’s supposed dyslexia. But why not make Mrs. Dodds a history teacher or a Latin teacher? They deal with text too!

Hrmph! We English teachers get no respect.

I’m hoping, by the way, that there’s some clever subtext at work in the fact that Percy is asked by Mrs. Dodds to explicate a line from Othello. Unfortunately, I wasn’t clever enough to note down which line it was, so I can’t comment on that yet. If anyone out there knows, please enlighten me. Or I may have to plunk down another $12 just to find out.