The Columbus Murals at Notre Dame

The next time that I teach American Literature I, I will accompany my discussion of Christopher Columbus’s letters with illustrations from among the series of murals painted by Luigi Gregori during the 1880s for the University of Notre Dame’s main building. Gregori had been a portrait painter and art restorer at the Vatican before he was brought to Notre Dame by the university’s founder, Father Edward Sorin to become the head of the university’s art department.

Gregori painted many works of art for the university’s buildings. In addition to the 10 Columbus murals, Gregori also painted the stations of the cross and several additional for the Basilica of the Sacred Heart on campus. For the Columbus murals, Gregori used members of the university community as models: he face of Columbus, for example, was based on the face of the university’s president, Father Thomas Walsh, the university’s president, and Gregori used himself as a model for a figure in the largest of the murals, Return of Columbus and Reception at Court. (Gregori is the man with the mustache behind the red drape in the far upper righthand corner of the painting.) Return of Columbus and Reception at Court was selected by the U.S. Post Office to serve as the design for a stamp issued to commemorate the 1893 Columbian Exposition in Chicago. 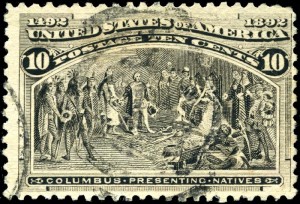 The little pamphlet about the murals that the university makes available to visitors begins with a disclaimer that appear on its cover:

The University of Notre Dame recognizes that the Columbus murals on the second floor of the Main Building reflect the 19th-century white European views of race, gender and ethnicity which may be offensive to some individuals. An interdepartmental faculty committee was appointed in 1997 to develop the following interpretation for today’s audience of the artistic, historical, and social content of the murals.

The subsequent analysis points out that the painting’s depiction of “the spoils of the voyage” includes not only “a Caribbean parrot with exotic plumage” but also Taino Amerindians and Moors: “Their presence helps to remind viewers that this bounty includes the souls of former ‘heathens’ converted to Christianity. Gregori’s depiction of the Tainos is, moreover, inaccurate: he adorns them 19th-entury costumes and artifacts used by Plains Indians, most probably because he was able to see these costumes and artifacts firsthand in the Notre Dame collections.

It strikes me, however, that even if the paintings present nineteenth-century ideas about race, gender, and ethnicity, they also do a good job of capturing the ideas about who is and isn’t civilized that animate Columbus’s letters (which is why I’d like to show them in class).

Columbus thinks, at first, that he has found China, but what he finds initially disappoints him: in his letter to Luis de Santangel about the first voyage, he reports that “there were neither towns nor villages on the seashore, but only small hamlets, with the people of which I could not have speech, because they all fled immediately.” He sends two men “inland to learn if there were a king or great cities,” and he reports that they “found an infinity of small hamlets and people without number, but nothing of importance.”

As the letter continues, he indicates that what he has found is marvelous in other ways. There may not be kings and cities, but there are wonderful natural resources:

This island and all the others are very fertile to a limitless degree, and this island is extremely so. In it there are many harbours on the coast of the sea, beyond comparison with others that I know in Christendom, and many rivers, good and large, which is marvellous. Its lands are high; there are in it many sierras and very lofty mountains, beyond comparison with that of Teneriffe. All are most beautiful, of a thousand shapes; all are accessible and are filled with trees of a thousand kinds and tall, so that they seem to touch the sky. I am told that they never lose their foliage, and this I can believe, for I saw them as green and lovely as they are in Spain in May, and some of them were flowering, some bearing fruit, and some on another stage, according to their nature. The nightingale was singing and other birds of a thousand kinds, in the month of November, there where I went. There are six or eight kinds of palm, which are a wonder to behold on account of their beautiful variety, but so are the other trees and fruits and plants. In it are marvellous pine groves; there are very wide and smiling plains, and there is honey; and there are birds of many kinds and fruits in great diversity. In the interior, there are mines of metals, and the population is without number. Española is a marvel.

[You can read the complete text of the letter at the Early Americas Digital Archive.]

There is something telling, I think, about the juxtaposition of “mines of metals” and “the population … without number” in the penultimate sentence above. Columbus regards both the metals and the people as natural resources available for exploitation. And exploitation is exactly what happens to Hispaniola, as Columbus letter to Ferdinand and Isabella about his fourth voyage makes clear. [Click here for the full text of that letter.]

Gregori’s painting Bobadilla Betrays Columbus reminds us of something that many students have forgotten or, perhaps, never learned: the Columbus is ultimately sent back to Spain in chains, having learned firsthand about the dark side of a civilization based on wealth and power, on kings and great cities.