I’m in South Bend, Indiana, visiting the University of Notre Dame for a couple of days. Because I’ve been teaching the Bible in my Conversations of the West class for the past few years, I’m particularly drawn to a couple of well-known pieces of campus artwork.

The first is the mural that adorns the exterior wall of the Hesburgh Library, renamed in 1987 to commemorate the life and work of the university’s longtime president, Father Theodore M. Hesburgh. The mural is the work of the artist Millard Sheets (1907-1989), who was asked to depict “idea of a never-ending line of great scholars, thinkers, and teachers — saints that represented the best that man has recorded, and which are found represented in a library.” The central image of the mural is Christ the teacher offering a blessing with arms upraised. Officially, the mural is the “Word of Life Mural,” because it dramatizes the opening of the Gospel of St. John:

In the beginning was the Word: the Word was with God and the Word was God. He was with God in the beginning. Through him all things came to be, not one thing had its being but through him. All that came to be had life in him and that life was the light of men, a light that shines in the dark, a light that darkness could not overpower. (John 1.1-5)

The mural, however, has a nickname. Because the mural is visible from one end of the football stadium and because Jesus’ pose resembles that of a referee signaling a touchdown, the mural is known affectionately as “Touchdown Jesus”: 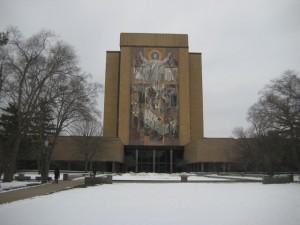 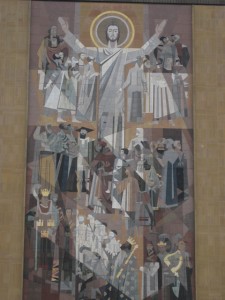 You can read more about the mural at the Hesburgh Library site.

If you walk to the left side of the library, you’ll find another iconic statue, this one depicting Moses pointing upward to heaven while berating the Israelites for falling into idol worship. The statue was created in 1962 by the Croatian American artist Joseph Turkalj (1924-2007).  Naturally, this statue also has a nickname: “First Down Moses.” 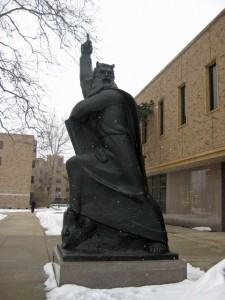 At least one Notre Dame student has suggested (in an opinion piece for The Observer, the school’s paper) that Moses’ gesture should be taken to indicate not a first down but the fact that Notre Dame is #1 when it comes to football.

And, yes, those are horns that you see on Moses’ head. 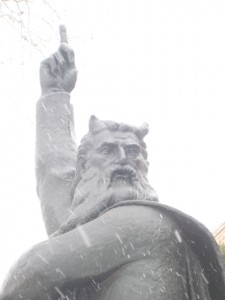 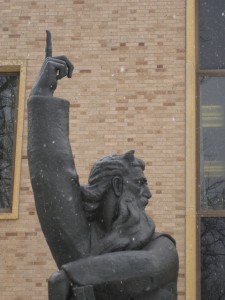 Portraying Moses with horns on his head has a long history, based on a literal translation of Exodus 34:29-35 in the Latin Vulgate Bible, in which Moses is described as having “horns.” Many scholars think that this is a mistranslation, because the Hebrew word for horns can also refer to “rays of light.”

Turkalj, however, was probably referring to one of the most famous depictions of Moses in scultpure, the statue by Michelangelo that forms part of part of the tomb of Pope Julius II: 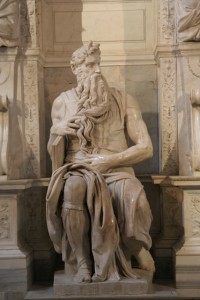 Here is the translation of Exodus 34.30 from the King James Bible: “And when Aaron and all the children of Israel saw Moses, behold, the skin of his face shone; and they were afraid to come nigh him.”