The Fate of Black Politics 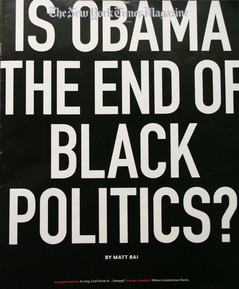 In my post on Arthur Schlesinger, Jr.’s critique of multiculturalism, The Disuniting of America: Reflections on a Multicultural Society, I wondered what Schlesinger would have thought about the meaning of Barack’s candidacy. Is
it possible, I asked, that the election of Barack would have a similar effect on
the self-esteem of Africans Americans that the election of Kennedy had
on Catholics?

The lead story by Matt Bai in today’s New York Times Magazine offers some thoughts on precisely that question. Bai, a white reporter, interviewers a number of black politicians, both veterans of the Civil Rights movement like House majority whip James Clyburn and Representative Charles Rangel, and younger politicians like Cory Booker, the 39-year-old mayor of Newark, and Philadelphia mayor Michael Nutter. The article registers the discomfort of being a white reporter asking black politicians why they did or did not feel drawn to Obama’s candidacy.

For a lot of younger African-Americans, the resistance of the civil rights generation to Obama’s candidacy signified the failure of their parents to come to terms, at the dusk of their lives, with the success of their own struggle — to embrace the idea that black politics might now be disappearing into American politics in the same way that the Irish and Italian machines long ago joined the political mainstream.

This is precisely what Schlesinger’s analysis of ethnicity would suggest about the fate of African-American cultural identity, assuming that the dynamics of race in the United States are more similar to the dynamics of ethnicity than not. For Michael Nutter, who supported Clinton, “not supporting Obama’s candidacy marked a kind of progress, too.” According to Bai, “you could argue that it was Nutter — and not those black politicians who embraced Obama because they so closely identified with his racial experience — who represented the truest embodiment of Obama-ism” — a post-racial politics.

Bai suggests that there is another way that Obama’s election might spell the end of Black politics as we have known them. According to Bai, some black leaders worry that an Obama presidency might mean “the precipitous decline of black influence,” because he would be “closely watched for signs of parochialism or racial resentment” and might therefore “have less maneuvering room to champion spending on the urban poor, say, or to challenge racial injustice.”

Only time will tell, but I persist in thinking that the election of Obama would be the sign of a new era in American politics, the new beginning that I and so many others hoped would arrive with Bill Clinton’s presidency but that failed to materialize.

The symbolism may be heavy handed, but I think it’s grand that Obama will officially become the Democratic nominee on August 28, the 45th anniversary of Martin Luther King’s
“I Have a Dream” speech.