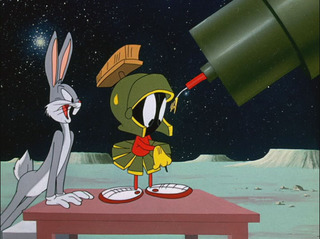 Sixty years ago today, Marvin the Martin made his debut on the Looney Tunes episode “Haredevil Hare.” As a child, Marvin was my second-favorite among Bugs Bunny’s nemeses, after (of course) the Tasmanian Devil.

Mel Blanc would change his vocal characterization of Marvin over time. In my mind’s ear, he will always sound the way he does in “Mad as a Mars Hare” (1963), the episode in which he utters his classic remark (after getting hit by a rocket from Earth), “I’m not angry. Just terribly, terribly hurt.”

As “Mars Hare” opens, we find Marvin looking through a telescope: “Hmm, yes. Very curious. Very interesting.
I do so enjoy observing the flora and fauna of that tiny planet. I
think Man is the most interesting insect on earth, don’t you?” He adjusts the telescope and then says: “There is a growing tendency to think of
man as a rational thinking being, which is absurd. There is simply no
evidence of any intelligence on the earth.”

I find myself thinking something similar every morning when I open The New York Times. This morning, for example, we find an article on the front page of the business section entitled “Oil Survey Says Artic Has Riches.” Here we learn that, with the melting of the ice caps brought about by global warming, areas that “were once considered too harsh to explore” are now accessible, and “a race has begun among Arctic nations, including the United States, Russia, and Canada, for control of these resources.” The survey suggests that “the Arctic may hold as much as 90 billion barrels of undiscovered oil reserves, and 1,670 trillion cubic feet of natural gas. This would amount to 13 percent of the world’s total undiscovered oil and about 30 percent of the undiscovered natural gas.”

Hmmm: burning oil produces carbon and leads to global warming; global warming makes Arctic oil more available, which will lead to more burning of oil — and more global warming. Oh well, let’s hope the energy companies will be more interested in the natural gas than in the oil. (Well, one can hope, right?)

You can find “Haredevil Hare” on disc 3 of The Looney Tunes Golden Collection, Volume One. Unfortunately, “Mad as a Mars Hare” doesn’t seem to be available on DVD at the moment, though it was released as part of a VHS collection entitled “Marvin the Martian: 50 Years on Earth.” You can also find it on YouTube:

A transcript of “Mad as a March Hare” is available at http://www.theclassictoons.com.