Wired Magazine and I Agree

The latest issue of Wired magazine arrived today, and guess what caught my eye as I scanned the cover (click on the picture to get a better view): 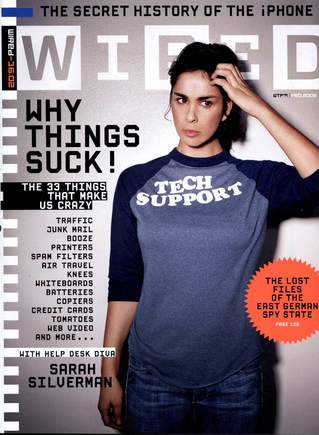 Knees. Right there with “traffic” and “junk mail” in a list of “33 things that make us crazy.” The article is “hosted” by the ever-hilarious Sarah Silverman, who says that she actually “love[s] technology.”

I would have put a lot of those things on the list myself, especially: the airplane TV screens [after last summer’s trip to Korea and this winter’s trip to California with the family.]; DVRs [Tivo is one of the two gadgets that I’ve brought home that my wife has found indispensable.]; farmer’s markets [We love Union Square!]; Netflix [Since just about day one, and now I love their streaming video services, which has just gone unlimited!]; salt-and-vinegar chips; public libraries [My wife is really good about using our local branch for current books and kids’ items, which is great since we’ve long since run out of bookshelf space.]; remote control [I had a remote control for my stereo back in 1984.]; ice Cream [though I hardly ever let myself have it these days.].

Her riskiest assertion, in my view: the Indiana Jones bit. I’m one of the few people I know that isn’t offended by the movie. But, despite, my surname, I’m not. [I remember talking about this years and years ago with the novelist Bharati Mukherjee at Berkeley, who was firmly in the other camp.] I agree with Silverman: those opening bits are indeed fab. (I’m not sure, however, whether Silverman means to suggest that the rest of the film does suck. No way to know without asking her.) The Temple of Doom is my least favorite of the three, but I’d take it over 98 percent of other choices in the action-adventure genre.

As for the knees, the little piece by Greta Lorge includes “backs” as an equal annoyance, but includes these bits of knee wisdom.

When our ancestors stood up on two feet, they stumbled upon a much more efficient way of walking that uses 75 percent less energy than knuckle-dragging. Over the next several million years, natural selection refined the structural modifications that keep our torso centered over our lower half as we put one foot in front of the other: longer legs, knobby knees, an elongated spine. But those adaptations can be a bit of a kludge.

By stacking the thigh bone directly on top of the shin bone, we’ve saddled our knees with more weight than they can handle. Even when you’re just strolling down the street, the pressure exerted on your knees is three to five times your body weight. During more strenuous activity like running or climbing stairs, it can be double that. By the time you hit 30, the cartilage that distributes your weight across the joint has already begun to wear away. The tissue loss may eventually lead to osteoarthritis, and the shin and thigh bones will begin to rub against each other This so-called wear-and-tear arthritis sends about 5.5 million people to doctors every year.

Well put and hard to argue with! Of course, in my case, the wear-and-tear has been rapidly accelerated by my ACL tear and reconstruction twenty years ago.

This issue of Wired also includes an interesting piece on the development of the iPhone. You can find it on newstands and online at the Wired website shortly.