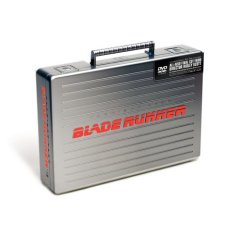 The new Ultimate Collector’s Edition of Ridley Scott’s Blade Runner (1982) arrived at my mail room yesterday, the day that it was released (thank you, amazon.com). Packaged in a “Rick Decard briefcase” (a replica of the case in which Deckard carries his Voigt-Kampff equipment), the set includes five discs. Disc one is a new and improved director’s cut that Scott calls his “favorite version of the film.” Disc two is a new documentary called “Dangerous Days: Making Blade Runner,” while the third disc offers three “archival versions” of the film: the U.S. theatrical cut and the International Theatrical cut, both released in 1982, and the director’s cut released ten years later.The fourth disc is a potpourri of ancillary materials about the making and marketing of the film.

Most unusual, and available only in this edition, is the fifth disc, which features the so-called “Workprint” version of the film that was shown to preview audiences in Denver and Dallas. It was the mixed reactions to the “Workprint” at those sneak previews that led the producers to make two controversial additions to the theatrical releases: a voice-over by Harrison Ford, who plays the film’s protagonist, and a happy ending featuring an escape to the green north.

Based on Philip K. Dick’s novel Do Androids Dream of Electric Sheep (1968), Blade Runner is one of my favorite films. Set in Los Angeles in 2019, it tells the story of Rick Deckard, a hard-boiled cop— a “blade runner” — who must find and “retire” four “replicants” (androids with superior physical and mental abilities) who have returned to earth illegally from the off-world colonies. Over the years, I had collected several versions of the film: the original U.S. theatrical release on VHS and laserdisc, as well as the director’s cut that was released on DVD. (It was, I think, the first DVD that I ever bought.) I’d also written abou the film in my dissertation, as part of a chapter called “The Ontology of Hard-Boiled Detective fiction,” and my analysis there suggested that the film is an exploration, and ultimately a valorization, of the mythic individualism celebrated in Hollywood westerns and in the speeches of the Ronald Reagan (genres that I also discussed in my dissertation).

So yesterday I decided to watch the Workprint version, which I had first seen in October 1991, when it was shown for two weeks at the Castro Theater in San Francsisco. I was doing a post-doc at Berkeley at the time, though I’d just been back at Harvard to turn in the final draft of my dissertation. While I was away, the famous Oakland Firestorm took place, but the house in which my sister and I had apartments was enough below the hills to emerge unscathed. I returned in time to see what was being billed as the “director’s cut” of the film. What I’d read about this version of the film, which had been shown earlier in the year in Los Angeles, was that the offending voice-over had been removed but that a legendary scene featuring a unicorn and meant to suggest that the film’s protagonist Rick Deckard (played by Ford) was a “replicant” was still missing.

The Workprint began as I had remembered it, with radically different graphics featuring a sliding white line, over which appeared “Harrison Ford” and then “Blade Runner” in blocky red capital letters, accompanied by the sound of a knife blades clashing. And then, instead of the explanatory crawl that prefaced the original theatrical version, a simpler dictionary definition of “replicant” hat struck me then and now as a more elegant way of  conveying the necessary information. Missing from the opening shots of a murky nighttime Los Angeles vista puncutated by flaming blasts from smoke stacks was an image that I had discussed at length in the dissertation: an eye in which the viewer can see the hellish scene reflected. At the time, I’d identified it as the eye of the blade runner Holden and suggested that it was the film’s way of linking the viewer’s perspective to the blade runner’s. I found it unfortunate that the director’s cut had excised the image.

Now, of course, I know that the Workprint wasn’t a real “director’s cut” at all but rather a pre-release version that Scott believed to be closer to his vision of what the film should have been than the final theatrical releases.

After the Castro screening, I added a brief analysis of the “director’s cut” to the Blade Runner section of my hard-boiled detective chapter, which at that point was still part of the manuscript that would eventually become my book Negative Liberties.

I suggested that the result of what I took to be the revisions made to the film was “a remarkable transformation that testifies to the power of the convention of hard-boiled narration to create an aura of mythic individualism.  Without access to Deckard’s thoughts, we see him not as a hard-boiled detective but as a paranoid hitman, and the likeness between the blade runner and the replicants, which includes their mutual vicitimization, becomes the film’s overwhelming theme. Indeed, an early version of the script literalized this theme by having Deckard realize at the end that he too is a replicant. The ‘director’s cut’ of Blade Runner offers a nightmarish tale of victimization, but the studio cut—motivated perhaps by visions of Star Wars or Raiders of the Lost Ark—uses the alternative vision of film noir represented by Philip Marlowe to alter radically the logic of the film, rendering it compatible with mythic American individualism.”

What struck me this time around, however, was the music. Vangelis’s score wasn’t complete at the time the Workprint was first shown to preview audiences, and the final scenes of this version of the film (when Deckard is finally confronting the lead replicant, Roy Batty, played by Rutger Hauer) are accompanied by cues taken from music written by Jerry Goldsmith for such films as Planet of the Apes and Alien. The cues were chosen and inserted by Blade Runner‘s editor, Terry Rawlings, and their effect is jarring in its conventionality. It’s canned suspense music that has the effect of highlighting just how important Vangelis’s score is to the overall effect of the film.

Blade Runner is a testament to the power of filmmaking as a collaborative art. The film’s brilliance is the result of contributions from all its participants, sometimes despite themselves. Just how miraculous this achievement was in the case of Blade Runner become clear when you read Paul M. Sammon’s marvelous Future Noir: The Making of Blade Runner (1996), a lively chronicle of the film’s production and reception history. Sammon includes a detailed history and description of the Workprint version.

I’ll have more to say about Blade Runner in the coming months, as I explore the Ultimate Collector’s edition and reread Sammon’s book.