Bart Giamatti, the President of Yale who became the Commissioner of Major League Baseball, began his marvelous speech “Baseball and the American Character” with the observation that “baseball fits America so well because it embodies the interplay of individual and group that we love.”

I’ve just finished watching the Cleveland Indians defeat the New York Yankees 6-4 to win their American League Division Series, 3 games to 1. Cleveland embodied that interplay of individual and group. The Yankees did not.

Tonight, I watched Alex Rodriguez drive in his first postseason run since 2004. It was a solo home run. Rodriguez drove himself in. It may well have been his last hit as a Yankee. There’s no doubt that A-Rod is a baseball virtuoso, but it seems to me more and more that he’s also what Giamatti referred to as a “solo operator.”

In his speech, originally delivered to the Massachusetts Historical Society in 1985, Giamatti described the home run as the one situation in baseball in which the aftermath of a pitched ball “fails to involve the team.” He described the home run as “the dispositive triumph of one over the other, the surrogate kill.” In all other situations, Giamatti wrote, “the communal choreography of the team eventually takes over. . . . Whether on offense or defense, the virtuoso is subsumed into the ensemble. The anarchic ways of solo operators are subsumed by a free institution.”

Cleveland played as an ensemble. The Yankees played like a bunch of unsubsumed virtuosos and solo operators.

It’s likely that the Torre era is now over. 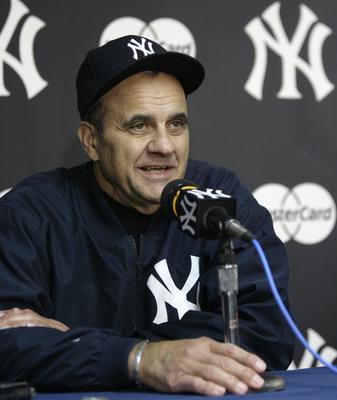 Or, rather, that the second half of the Torre era is now over. I tend to think of Torre I as 1995 through 2001, the years that saw the Yankees reassert themselves as a perennial postseason power, winning four World Series (1996, 1998-2000) and an AL pennant (2001). Torre II begins with the signing of Jason Giambi and is notable for the signings of Mike Mussina, Hideki Matsui, Randy Johnson, and A-Rod. The Yankees won the AL pennant in 2003, but they haven’t won anything of note since A-Rod joined the team in 2004. Indeed, the most notable event of Torre II was probably losing the ALCS to the Red Sox after leading it 3-0 in 2004, allowing the Red Sox finally to break the so-called “Curse of the Bambino” and win World Series for the first time since 1918.

If Torre II didn’t live up to the expectations generated by Torre I, I’m not sure it’s Joe’s fault. He played the hand he was dealt and, this season especially, he played it like a master. But there’s only so much you can do with virtuoso solo operators. Out of all the signings I mentioned above, only one, I think, turned out well.

There are times in baseball when a home run isn’t what you need. For example, when you’re several runs down, and there are men on base, and a home run will clear the bases but not get you even. In those situations, it may be better to hit something less than a home run, simply to keep the rally going, to leave it to the next batter to build on your achievement. There are some times when a single would be enough: for example, the fourth inning of game 2 of the ALDS between the Indians and the Yankees, when A-Rod struck out swinging, with Derek Jeter on second base. At the time, Jeter represented a crucial insurance run; it might have proven to be the game-winner. Or the top of the ninth in the same game, when A-Rod struck out swinging again, with Bobby Abreu on second base, representing the go-ahead run and, again, possibly the game-winner.

Sometimes a home run can propel you to victory, as in game three, when the Yankees, down 3-0 early, managed to gain the lead on a home run by Johnny Damon in the fifth inning. But more often it’s the crucial, two-out single that’s the key to victory. Cleveland managed to get those. Cleveland’s first three runs in game one came on two-out singles. Three of the runs in their five-run fifth came with two outs, as did two more in the sixth. Cleveland’s winning run in the eleventh inning of game two came with two outs. And in game four, Cleveland opened up with a home run, but the rest of their runs were driven in by a double play and a some well-timed singles. The Yankees hit three solo home runs, including Rodriguez’s. The last one made it 6-4 in the ninth and brought Rodriguez to the plate. A solo homer would have made it 6-5. A single would have brought the tying run to the plate. Rodriguez popped out. And Jorge Posada, who had an amazingly prolific season at the plate, struck out swinging.

So it’s on to the championship series: in the NL, Arizona versus the surprising Rockies, winners now of 17 games out of their last 18; in the AL, Cleveland versus Boston. May the best ensemble win!

[Giamatti’s speech was reprinted in the October 1986 issue of Harper’s magazine. You can also find it in A Great and Glorious Game: Baseball Writings of A. Bartlett Giamatti

, edited by Kenneth S. Robson, with a foreward by David Halberstam (Algonquin Books, 1998).]