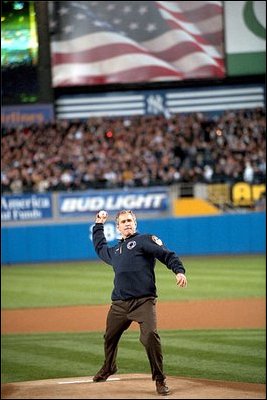 On the eve of the 2006 World Series, with an important national midterm election looming soon afterward, it’s worth reconsidering what the literary scholar Jacques Barzun wrote half a century ago: “Whoever wants to know the heart and mind of America had better learn baseball, the rules and realities of the game.” After all, a lot of Americans have taken this idea seriously, including the man who currently sits in the Oval Office.

Bush owes a lot to baseball. His public life really began with his stint as managing partner of the Texas Rangers, and as a politician, talking baseball has helped him to promote himself as a man of the people. He and his speechwriters know how to use baseball imagery to make the values associated with his politics seem to be natural, timeless, and distinctively “American.” Was it any surprise that the video biography shown before his address to the Republican Convention in 2004 was called “The Pitch” and climaxed with his appearance at the World Series in New York shortly after 9/11? History may well remember that moment as the finest of Bush’s presidency.

As the baseball season winds to a close, I find myself thinking back to its beginning — indeed to the pre-season and the inaugural World Baseball Classic. The U.S. team was a disappointment, and Japan defeated Cuba to win the title. I remember wondering at the time whether George W. Bush had taken any interest in the tournament. I remembering thinking that he should have, because it might have led him to rethink the way he invokes the so-called national pastime. It might even have taught him a political lesson or two.

At the start of each game of the World Baseball Classic, a television announcer would intone: “The game that means ‘America,’ now means so much to the world.” But this is nothing new. The Japanese have been playing organized baseball since 1873. Baseball is now cherished in Japan and Korea and across the Caribbean and Latin America. As far as exporting our cultural traditions goes, we’ve been much more successful with baseball than we have been with democracy. Fidel Castro doesn’t love the U.S., but he sure loves el béisbol.

There’s an allegory about both American power and the American character be found in the Classic somewhere. Team USA may have entered as the nominal favorite, but it didn’t make the semi-finals after losses to Canada, Korea, and Mexico. Mission not accomplished.

After the U.S. narrowly won its second-round game against Japan with the aid of a call by an umpire that ESPN’s television announcers deemed “a crying shame,” Senichi Hoshino, a senior director of the Hanshin Tigers, fumed: “Any umpire who makes a mistake like that should just quit. It is bush league.” Hoshino no doubt intended his remark to be disparaging. After all, “bush-league” connotes inferiority, even incompetence: if you’re bush-league, you belong in the minors, not in the majors.

But “bush-league” is a little less, well, bush-league these days: in recent years, many Americans have begun to embrace a bush-league perspective, priding themselves on their down-home roots. Minor league ball can seem more “real” than the show biz game played in big cities like New York, Los Angeles, Chicago, Boston, and Washington, DC. Watching a “farm team” playing in a small stadium in a small town can seem like a more intimate and more authentic (not to mention cheaper) way of watching the game. Think Bull Durham, which celebrates the seeming timelessness of the minor-league game.

What’s sinful about cosmopolitanism is the fact that it offers an alternative to nationalism: to be cosmopolitan is to consider yourself first and foremost a citizen of the world and to put your obligations to humanity above your obligations to your country. Even worse, cosmopolitanism also offers an alternative to the kind of universalist thinking that emphasizes sameness and common denominators. It leads to an appreciation of difference. Cosmopolitans see difference as an opportunity to be embraced rather than a problem to be solved.

The bush-league perspective isn’t interested in difference. It’s interested in what makes Americans American, and it cherishes the belief that America is exceptional because it is founded on the idea of individualism.

Former MLB Commissioner A. Bartlett Giamatti wrote that “baseball fits America so well because it embodies the interplay of individual and group that we love.” Seen as the most individualistic of team sports, baseball is often described as a fundamentally conservative game, not only because of its emphasis on individual achievement, but also because of its reverence for the past, its perpetuation of patriarchal values, and its evocation of pastoral experience.

But the institutional history of the sport suggests that there might be an alternative way of thinking about what baseball tells us about ourselves as Americans. Indeed, we can use what Barzun referred to as the “realities of the game” to “reframe” baseball (to use the term recently made popular by the Berkeley linguist and cognitive scientist George Lakoff). Look at the same set of facts through a different interpretive lens and suddenly baseball seems not “conservative” but “progressive,” not a ‘national’ game at all, but rather a cosmopolitan game with an international past and future.

Two years ago, the Baseball Hall of Fame mounted an exhibition that gave credence to the idea that the roots of baseball are much older than we’ve thought and possibly traceable to the ancient Egyptian game of seker-hemat. What’s more, baseball’s roots in pastoral experience may be overrated as well: the professional game probably arose from rules codified in 1845 by a team from New York called the Knickerbockers. And baseball was well ahead of the curve of American social progress in 1947 when Jackie Robinson broke the color barrier by playing for the Brooklyn Dodgers.

Just before the Classic began, Sports Illustrated wrote that “big league baseball is, by almost any definition, more popular in the U.S. than ever.” It’s also more culturally diverse than ever: at the start of last season, there were 1,187 players on the 40-man rosters of all the major league teams. Of these, 830 were born in the U.S., 141 in the Dominican Republic, 78 in Venezuela, 39 in Puerto Rico, 21 in Mexico, 20 in Canada, 13 in Japan, 10 in Cuba, eight in South Korea, seven in Panama, six in Australia and 14 elsewhere. And, in acknowledgment of the international roots of American culture, one-third of the U.S.-born major leaguers participating in the World Baseball Classic are playing for teams other than Team USA.

What was valuable about the World Baseball Classic was not that it encouraged players to become nationalists for two weeks, but rather that it allowed them to cross, at least for a while, the boundaries that typically separate them — imagine Yankees and Red Sox hugging one another in the dugout after Team USA defeats Japan! Afterwards, they returned home to their major-league teams enriched by the experience of playing with those they usually play against, and against those they usually play with, not to mention being on the same field with players from other countries whom they would otherwise never meet. And I need hardly mention one of the biggest examples of working across boundaries: the Classic was a partnership between two long-time antagonists, the owners and the players.

If we take for granted that Barzun was right, that baseball holds up a mirror to the American character, perhaps it’s time we reframed that mirror and took a closer look. The U.S., like baseball, is far more cosmopolitan than the bush-leaguers would have us believe. Mr. Hoshino was, I think, onto something much bigger than the outcome of a baseball game. It’s time to admit our mistakes and leave the bush-league perspective behind. We can begin at the voting booth this November.